The Watercress Beds or Lyde. Call it which you like!

How we all loved Lyde! We’ve known them for over 80 years, and no one seems to know when they were started, but alas they are now fading out, and part is already filled in. Cress is always grown in running spring water, and there used to be a lovely Spring Head at the top of the Dell which of course served the Cress Beds and also the villagers who had no well. There was a sturdy iron pump there for the purpose. All this end is now earthed over. 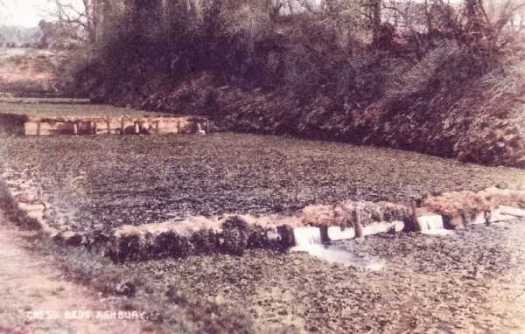 Henry Tilling who has lived in the village all his life and is now in his seventies, remembers he was one of the boys who had to fetch a bucket of water daily for the school. He and another boy were coming out of Lyde one day with the water when a gentleman passing asked what they were doing. He explained they were fetching it for the school. As they reached their destination the man noticed it was delivered to the School House, thereupon the boys were told, they were not to do that in future, as they were sent to school to learn !!!!!

My memories of the cress beds are –

1. Word would go round the village ‘the Cress men are here’ meaning – men who worked it from Childrey would be cutting that day, and if one wanted any Cress the best thing was to take 3d or 6d and get a bunch “cut while you waited” !!!! and it was some bunch too, quantity seemed of no object !!!!

2. A very dear woman, a friend of ours, who lived “round at Berrycroft” was dying of a terminal illness, and the chief thing she fancied was a glass of spring water from Lyde. Her family’ saw to it that a fresh jug of Lyde Water was fetched every day as long as she needed it.

3. Two houses chiefly overlook Lyde. One was occupied for many years by a family named Halliday. The eldest son Tom, was in the first World War, and at one stage was desperate for water. Can’t you imagine his thoughts? He says “he longed” – “Oh how he longed”, for a glass of Lyde Water !!!

Also Halliday had planted some apple pips from a special apple he had given him, and yes several were growing and father (W.J.B.) was promised a tree when large enough ! Several years after Mr H. died one of his sons brought up the promised apple tree and planted it for us in our garden. It is now a beautiful apple tree, and we are now eating the last of last year’s crop and it’s March, so what good “keepers” they are too !!!

My personal recollections, are running down the little footpath as far as the pump, then running up the other little footpath on the opposite side!! and joining the main road again! Also when teaching the tiny tots, in the Sunday School, at the Mission Hall nearby, the first sign of Spring was when the little dears would bring in 3 or 4 Celandines (a yellow flower) to give to me, they would hold them up in their hot little hands, and be so pleased !!! I knew where they had got them from. Lyde of course, because it was nice and sheltered !! 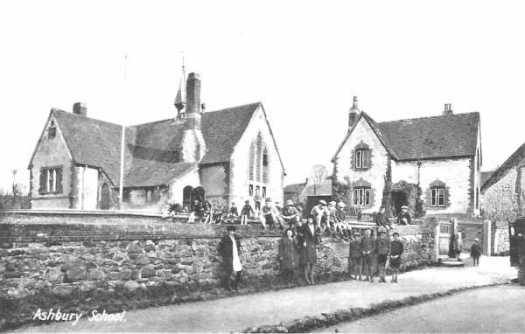 “Ashbury School (left) that H. Tilling collected the water for, and also the School House (right) where he delivered it (photo courtesy of P.A.W.)