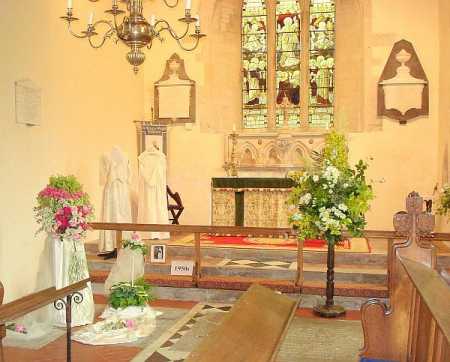 The Flower Arranging Workshop in St Mary’s Church on 11 June attracted 28 participants from many surrounding villages, Faringdon and even Swindon. Novices were paired up with those having previous experience and all made a pew end, plus either a pedestal or a cascade arrangement. Click here for photographs. The church looked absolutely magnificent when all the floral creations had been sited amidst wedding dresses that spanned the 18th century to the present day (click to view). In most cases the dresses were accompanied by wedding photographs (click) of couples married in Ashbury in the same decade; some showed up to three generations from the same family.