Interesting facts concerning the Church and Parish of Ashbury, Berkshire 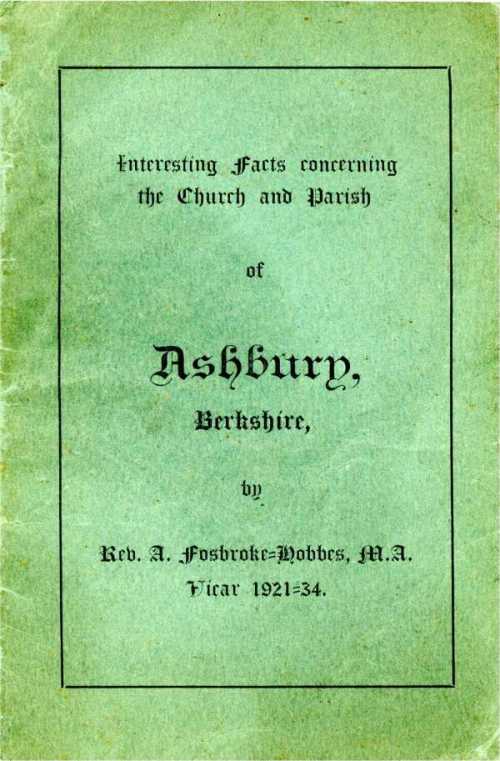 To Visitors to the Church of St. Mary the Virgin – Our Lady of the Vale

POINTS OF INTEREST AND WHAT TO LOOK FOR

1. THE PARISH OF ASHBURY

First mentioned in the Cartulary of Abingdon Abbey where it appears as the boundary of the dominions of Kinewulf, King of the West Saxons A.D. 688—757 (“Ichenilde Street to Essebury.”). Note that it is still the boundary of Wilts and Berkshire.

In 854 King Ethelwulf gave the village to ALCMUND who made it over to the ABBEY OF ABINGDON. The Parish at this time almost certainly included Compton and Uffington.

In 1544, after the dissolution of the Abbey, Henry VIII granted the Manor to the Earl of Essex of whom it was bought by the first Lord Craven who built Ashdown Park (to escape from the plague).

It has thus been held by only three owners since A.D. 854 —a period of eleven hundred years.

Of mixed styles of architecture.

SAXON The Saxon church has crumbled away, or it may have been built of wood.

NORMAN (1090-1150 A.D.) The South Doorway is a really choice specimen of this period. From outside, notice the zig-zag mouldings of the round arch. Notice how the level of the Churchyard has risen after 900 years of burials.

At the South West corner of the Nave you will notice the remains of the arch of the Norman church with the corresponding shaft on the other side.

The Domestic Fireplace at the West end of the North aisle is a most uncommon feature. The smoke used to be emitted from the gaping mouth of a Fiend gargoyle outside. (Local name, “The Devil’s Head”).

EARLY ENGLISH (A.D. 1189-1272) The main fabric of the Tower is 13th century. Notice the winding staircase and small lancet window, and the buttresses (outside). Also the quaint Churchwarden memorial leads into the vestry, dated 1704 etc.

DECORATED (A.D. 1272-1300) The Chancel and the two transepts. In the South Transept under the South window is a large cinque foiled arch and a piscina: this may have been the tomb of a founder or an Easter sepulchre. The ancient stone coffin was found in the churchyard.

Between the wall of this transept and the arch of the South aisle is an unusual kind of squint or hagioscope filled with good open tracery.

PERPENDICULAR (A.D. 1360-1547) The central arches with their mouldings. The Nave was built in the late style of this period to replace the Norman one. The roof is a beautiful one. Notice the carved heads of workmen (?) or local celebrities (?). The Porch with fan tracery, open windows and wall seats belong to this period. The Porch is rightly admired by everyone.

OTHER FEATURES NOT TO BE MISSED

1. The Priests’ cell or sacristy over the porch is particularly interesting and should be visited.

2. There are three ancient brasses in the chancel — two to former rectors dated 1448 and 1409, and one to a member of the de Walden family.

3. In the old chest a pair of Pre-Reformation alter candlesticks of brass and the top of a censer were found in 1794. The date was about the 13th century.

4. The Memorial Chapel of St. Hubert, the Patron of Hunting, was given in 1926 in memory of Evelyn, Countess of Craven, a founder of the Craven Hunt and patroness of the renowned Ashdown Choir.

The artist was Mr. Martin Tracers, F.S.A., of London.

3. THE VILLAGE AND NEIGHBOURHOOD

In the centre of Ashbury stands the Village Cross of Sacrifice ….. lest we forget …

A 15th century building, semi-fortified, with a deep moat on three sides (still remaining). It was probably the Grange of the surrounding lands farmed by the Abbey of Abingdon.

Situated in this Parish and not in Uffington as stated erroneously in some guide-books. Near the Rideway this prehistoric monument has stood lonely and little known for countless centuries. It was mentioned as an ancient monument in a charter as far back as A.D. 955 – suitable as a boundary between manors. It is so old that archaeologists cannot be sure when or by whom it was built. The well known authority, Mr. D’Almain, dates it before Avebury – certainly long before Stonehenge. It is thought to be the earliest known piece of human architecture in Europe.

For legends, etc., about it see Scott’s Kenilworth. Scott stayed at Kingston Manor in this Parish.

Along the top of the Berkshire Downs the wide grass-grown way is clearly defined, as it has been since it was used by the worshippers who visited Avebury temple – possibly before then even – by the Romans before they built the lower-level road above the marshy vale (The Portway), by the Saxons who garrisoned the earthwork camps at the White Horse Hill and Ashdown, by countless generations up to the present day when it serves as a highway for farm traffic, gypsies (amateur and otherwise), and walking-tourists.

This is the road under the Downs to Wantage – built by the Romans for a military road above the marsh – more direct and of better surface than the old Ridgeway.

The House (Inigo Jones period) and Park are very beautifully situated in the lonely and lovely stretch of Downland above Ashbury, but still in the Parish. Behind the woods of the Park is King Alfred’s Camp – but seldom visited.

From the year 1775 to 1778 there was a young Curate at Ashbury who started a world-wide institution.

THOMAS STOCK, (M.A. and afterwards Fellow of Pembroke College, Oxford), deploring the appalling ignorance of country workers, started a voluntary school on Sunday mornings in the Chancel of Ashbury Church, This was actually the beginning at the free educational system organised later by the National Society – and quite recently expanded by the Board of Education into the vast organisation of State Schools. Thomas Stock went from this Parish to Gloucester where he met the more famous Robert Raikes, and in the course of a life-long friendship they popularised the Sunday School throughout the land. In time the Sunday Schools came to teach only Religious subjects and the Catechism, to re-inforce the teaching obtained in the Church Schools under the National Society. Other bodies (Roman Catholic and Protestant) took the idea up with enthusiasm, and to-day there is hardly a Church or Chapel anywhere unconnected with a Sunday School. This is partly due to the fact that no definite Religious Education is undertaken in State Schools. When the size of the classes outgrew, the capacity of the Chancel, a Cottage in the Village was provided (still standing) and a Schoolmaster employed. The School Journals are still preserved, and are most interesting. Ashbury has thus played a great part in the history of Educational systems in this and other countries.

THERE ARE MANY OTHER BEAUTIFUL AND INTERESTING PLACES TO VISIT IN THE NEIGHBOURHOOD—AND THEY REALLY DESERVE MENTION. VISITORS ARE WELL ADVISED TO COME AND STAY IN THE VILLAGE. THERE WILL BE PLENTY OF GLORIOUS RAMBLES AND INTERESTING EXCURSIONS.

If any further information about the History etc, of the above mentioned features of interest is required, the Vicar will be glad to do his best to supply it on application at any time at the Vicarage.

The Parish is purely an Agricultural one, and is therefore suffering much from the prevailing Agricultural industrial depression. It is increasingly difficult to find the necessary Funds required urgently for the UPKEEP AND RESTORATION of our beautiful Church and Churchyard.

WILL YOU VERY KINDLY HELP US BY PLACING A CONTRIBUTION IN THE BOX PROVIDED FOR YOU?
We shall appreciate it.