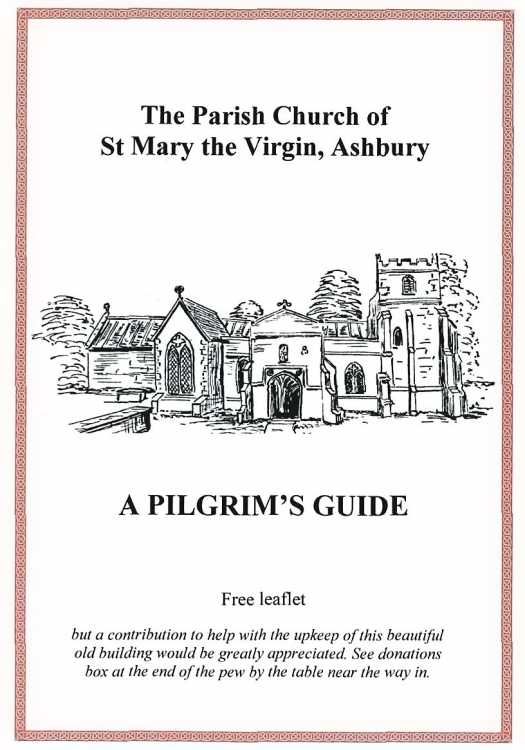 St Mary the Virgin, Ashbury
A PILGRIM’S GUIDE TO THE CHURCH
WELCOME TO ST MARY’S! We do hope you will enjoy your visit to this historic church building. This is a pilgrim’s guide, so as you look around the church, we shall try to explain the meaning of some of the things you see. A church is more than just a building – it is a place where people who comprise the living church meet to worship the living God.
1 The Way In

Did you notice the lovely statue of the Virgin Mary and Child over the entrance of the Porch? It was carved by a local artist, Heidi Seton-Lloyd, in 1952. The north door in the Porch was put in when the church was enlarged in the 15th century. It probably incorporates parts of the former north door. The door on the south side opposite is no longer used now. There is also an old door on the north side of the Chancel, where the priest would have entered to take services in medieval times.
There is a Priest’s Room (also known as a Parvise) above the porch, entered via a door and steps behind the Font. The Porch itself was very important in medieval times, as it was where the baptism, marriage and funeral services began and penitent sinners received absolution before entering the church. The stone seats may well have been used as a school, the priest-teacher keeping his books in the room above.
The small niche or stoup to one side of door originally contained holy water. This was used by worshippers on entering to make the sign of the cross on their foreheads as a reminder of their baptism and the continuing need for cleansing from their sins.
Church doors are a reminder that Jesus said, ‘I am the door; if anyone enters by me, he will be saved.’ (John 10:9) Christians ‘enter’ God’s Kingdom by Christ when they ask him to be their Saviour.
2The Font 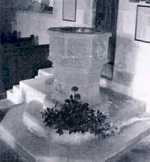 The Font is 15th century, mounted on modern steps. The sides the Font are intricately carved and the inside is lined with lead. The Font is near the door, to symbolise the fact that we must be baptized at the start of our Christian lives.
The Font is used for baptism, when a person is ceremonially washed with water in the name of God, Father, Son and Holy Spirit. Baptism is an outward sign of an inward gift from God. This gift is the forgiveness of sins and the start of a new life as a member of his family. The water speaks of a cleansing from sins and the life-giving Spirit of God. A child is brought to baptism because of the faith of the parents and godparents, but later the child must choose to follow Christ for himself or herself. This is usually marked by the service of Confirmation, but we all need to reconfirm our baptismal promises from time to time.
3The Nave and Transepts
Before pews were introduced in the 15th century, people had to stand in church, except for the elderly and infirm. They could sit on a bench against the wall, hence the saying “the weakest go to the wall.” The original pews would have been high-sided box pews, for which rents had to be paid. Sometimes stoves and fireplaces were introduced into the larger box pews for big households to provide comfort. 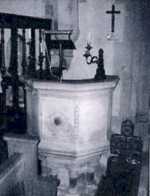 Originally there was no pulpit, sermons being preached outside the church or by the Altar or in the least draughty place in the church! Notice the 15th century fireplace in the North-West comer. In 1603, all churches were ordered to have pulpits, for they were considered essential to ensure that the message of the Bible was regularly preached to the people. The present pulpit dates from 1870.
It is important that the whole congregation feels part of the worship, since all have a part to play. That is why the high-sided box pews have gone. Sermons are still important, but rather than preach ‘six feet above contradiction’, the preacher now often stands close to the congregation.
4 The Chapels
The church is almost cruciform in shape, with chapels in the transepts. The North Transept contains the Craven Chapel, since it was furnished in 1926 as a memorial to Evelyn, Countess of Craven. The chapel is dedicated to St Hubert, Bishop of Liege, who died in 727 and is the patron saint of hunters. The windows in this chapel tell something of his life. The reredos is modern, the work of Martin Travers. The Craven Chapel contains the Roll of Honour commemorating those who died in the two World Wars and the Falklands War. Lacework worn by Lady Evelyn on her wedding day is displayed – the eagle eyed may detect that the lace kerchief is incorrectly positioned.

The Lady Chapel is in the South Transept. It was originally a chantry chapel, where prayers were offered (ie, chanted) for the dead. Under the fine cinquefoiled arch was probably the tomb of its founder. Notice the piscina, a shallow stone basin set in the south wall used for washing the sacred vessels after Holy Communion. The chapel is used regularly now for early morning prayers on weekdays.
By the Lady Chapel you will see a number of old bibles. The oldest in the glass case was printed by Robert Barker in 1634. The Authorised Version of the Bible was a complete new translation into what was then contemporary English, first published in 1611.
The Bible is God’s Word and it is vital that all can hear it read from the Lectern in language that they can easily follow. The Bible used today for the readings in church is the New Revised Standard Version, which is a direct descendant of the Authorised Version.
5The Chancel and Sanctuary
Before you enter the chancel, stop at the steps where people over the centuries have been confirmed by successive Bishops. ‘Confirmation’ is when Christians confirm for themselves the promise to follow Christ which was made on their behalf when they were baptized as babies. Baptism is also referred to as Christening. At Confirmation, the Bishop prays for those being confirmed that God will increase the gift of his Holy Spirit in them. The Bishop’s seat you will find in the sanctuary.
The chancel steps are also the place where countless men and women over the years have made their vows to each other of love and faithfulness in the Marriage service. Pray for God’s blessing on marriage and family life today. 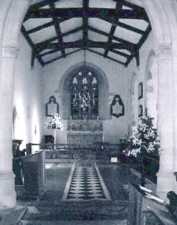 In this chancel in 1777, the first ‘Sunday School’ was founded in England, by Thomas Stock, the curate of Ashbury. The Sunday School grew and moved to a cottage in the village, from which it developed over the years to become the Church-aided Primary School. Thomas Stock later moved to Gloucester, where he was invited to form a Sunday School by Robert Raikes, a publisher who later popularised the Sunday School idea. It became a movement touching almost every church in the land. There is a memorial tablet to Thomas Stock on the north wall of the chancel.
Some of the people who have worshipped in this church are commemorated in stained glass, memorial tablets and brasses, or ledger stones. On the floor by the communion rail are three very old brasses: John de Walden 1360; Th Bushbury 1409, a former rector; and Wm Skilton 1448, also a former rector. Between the brasses are two ledger stones: John Ferebee 1681, a former vicar; and William Phillips 1684, a former churchwarden.
The Communion Table reminds us of the heart of the Christian message. Jesus died on the Cross to take our sins and rose again to give us life. The family of God remembers his death and resurrection by gathering around the Table to receive Holy Communion. The bread and the wine are the outward signs of God’s gift of his only Son. In receiving these signs in faith and trust, we receive Jesus Christ.
6Tower
In addition to an angelus bell, the tower houses a peal of six bells, which are rung most Sundays to call people to worship. One of the bells was provided by William Phillips (whose ledger stone we saw in the chancel) to ring in the restoration of Charles II. The rest date from 1733 to 1873. The weight of the tenor bell is 14 cwt (713 kg). The room at the base of the tower serves as a vestry. On the wall you will see two wooden tablets on which are written the Ten Commandments. There are also lead tablets commemorating repairs to the lead roofing.
7Architectural notes 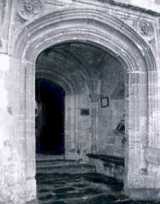 The first reference to a church at Ashbury was in 947AD, in the Glastonbury Abbey Chronicle. The present building dates from the 12th century, where the Normans built on the site of the earlier Saxon church.

The Norman church was probably cruciform in shape, with nave without side aisles. In the 13th century, the church was enlarged, aisles were constructed and the transepts rebuilt. The building of the tower began. In the 14th century, the chancel was rebuilt and lengthened and new windows were added to the transepts. In the 15th century, the aisles were rebuilt. Note the beautiful proportions of the nave columns and arches and the very fine roof timbers. At this time, the west window was added and the north porch built, with handsome fan tracery and wall seats.

These are just some of the features of this ancient building, where people have worshipped God for at least a thousand years. But old churches are not meant to be dry and dusty museums – the living church is made up of the people who use the building in this as in previous ages for prayer and praise, for forgiveness and encouragement, for joy and sorrow, for teaching and correc­tion.

We are a part of the Christian family in Ashbury and worldwide. Working side by side with Christians from all churches, our prime aim is to respond faithfully to God’s call. Only then can we fulfil his purposes in witnessing to his truth and helping others to find faith, hope and love in him.
We hope that you have enjoyed your visit to St Mary’s. Do take a look at the book table by the door before you go – you will find a wide range of materials to inform, to challenge and to inspire. Please also say a prayer for all who worship here and for yourself. You would be welcome at any of our regular Sunday services listed overleaf:
First Sunday in the month 10.00am Family Service
Second and fourth Sundays 11.00am Holy Communion
Third Sunday 11.00am Morning Prayer
Fifth Sunday 10.30am Benefice service (at different venues)
Bless, O Lord our God, the worship and work of this church, that it may be a house of prayer, a centre of sound teaching, a community of service and a witness to your redeeming love; through Jesus Christ our Lord. Amen
Lord Jesus, you gave yourself for me upon the cross. I now give myself to you:
all that I have,
all that I am,
all that I hope to be.
Give me your forgiveness, your love, your courage, and send me out in your name and in your service. Amen
Vicar: Associate Vicar:
Revd. Richard Hancock Revd. Michael Starr
The Vicarage, High Street The Vicarage, Ashbury
Shrivenham, SN6 SANSwindon, SN6 8LN
Tel. 01793-780183 Tel. 01793-710231
Churchwardens:
Richard Green Margaret Smith
Rectory Farm, Idstone, Ashbury, Swindon SN6 8LP
Swindon, SN6 8LG Tel: 01793 710759
Tel. 01793-710227
August 2004 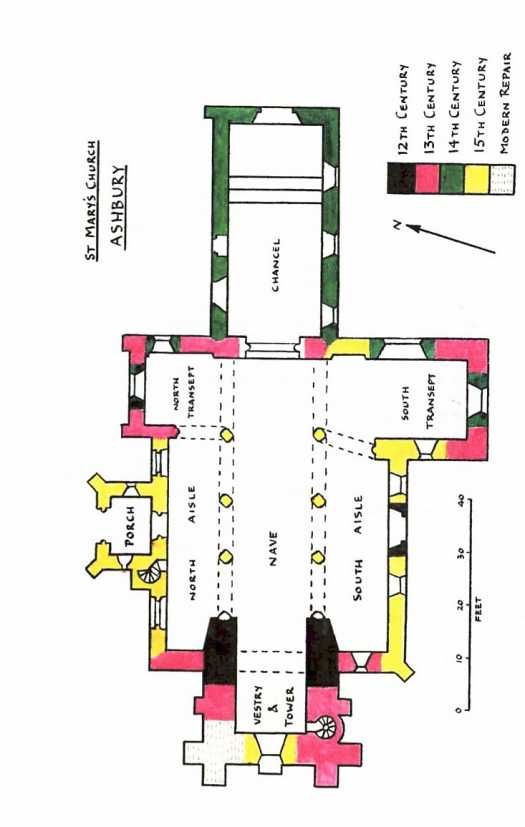