February: We held a coffee morning at Hazel’s House where we made Green Hearts in Support of the Climate Change Coalition. 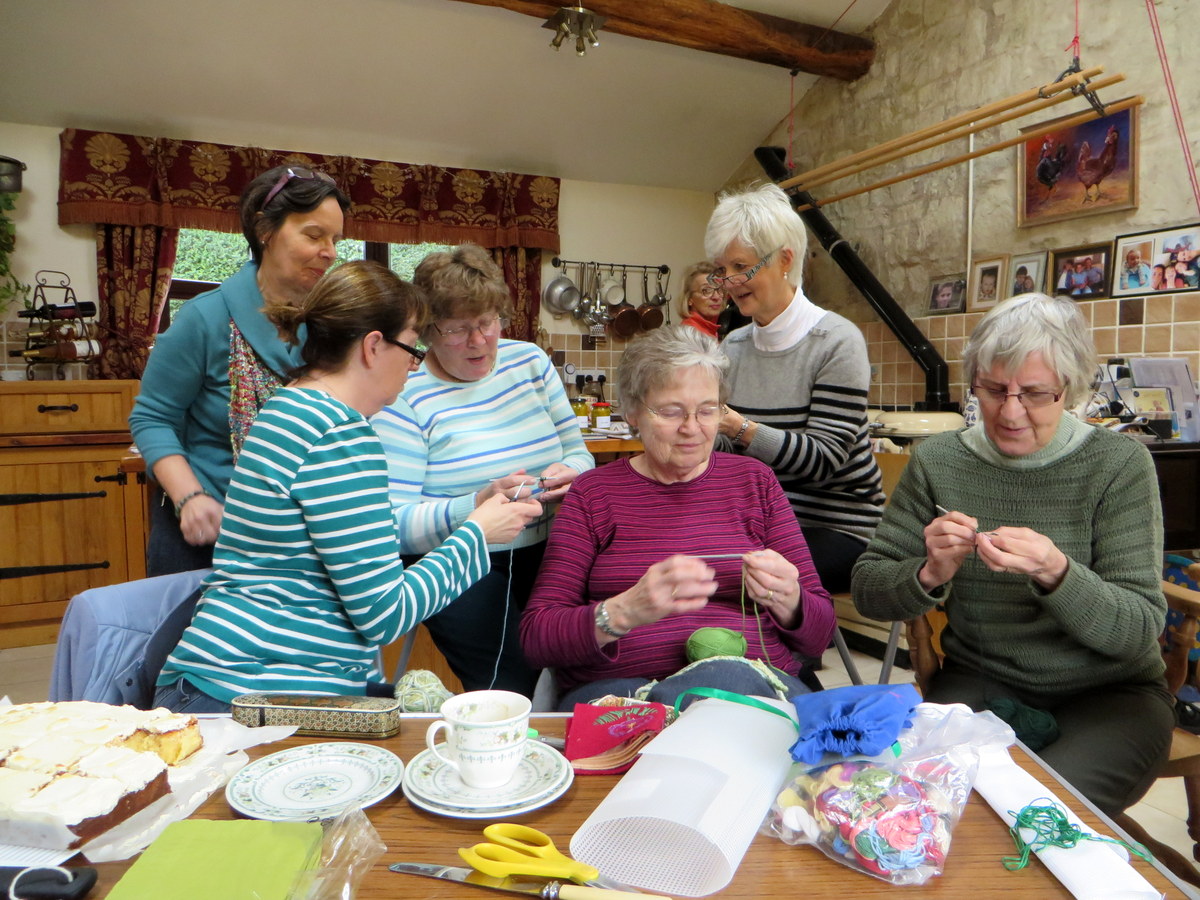 March: Some of us enjoyed a ghost walk around Wroughton;  although we stood where the ghost has been seen, it sadly failed to make an appearance on this occasion! 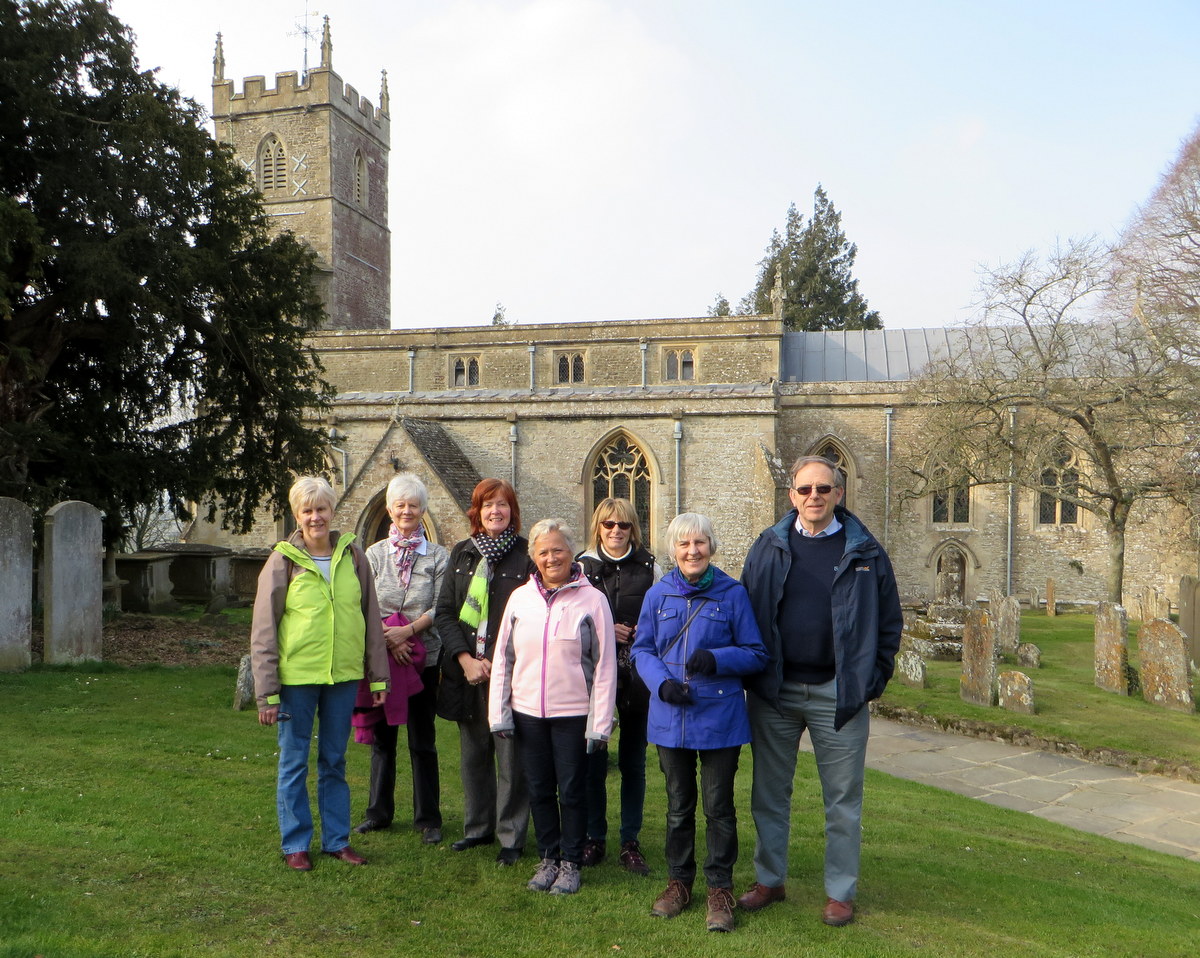 March: We held our Annual Meeting and Elections on 12th March. Hazel was re-appointed President.  Diane and Caroline stood down from the Committee and were thanked for their valued contributions. In their place we welcomed two new Committee members – Fran and Jan.

May: Four of our Members’ (Kathy, Doris, Claire & Hazel) attended the Ridgeway Group Meeting at Ellendune Hall, Stratton on the evening of 26 May. The entertainment for the evening was provided by KAYA Drums and although there were around 60 WI members present, there  were enough drums/sticks/bells for everyone. The time went quickly and it was most enjoyable. Our WI provided the refreshments for the evening

June: a) Caroline, Maggie, Diane, Trish and Clare attended the WI Centenary Garden Party at Buckingham Palace along with several thousand other WI members representing every WI in the country. We walked through two of the Palace rooms to get to the gardens at the rear. It was a blustery day and hats were seen bowling across the lawns – but thankfully the rain held off. The tea refreshments included cucumber, chicken and smoked salmon sandwiches, strawberry tarts, chocolate fondant cake, eclairs, tea, iced coffee or fruit juice and afterwards, strawberry ice cream. HRH The Duchesse of Cornwall hosted the event and was accompanied by the Countess of Wessex, the Duchess of Gloucester and Princess Alexandra who stopped to talk to members en route from the Palace to the Royal Tea Tent.

June: b) The NFWI Centennial Annual Meeting held at the Royal Albert Hall was viewed by some of our members at Lynda P’s home via live streaming on U-tube. Maggie attended the meeting in her capacity as a member of the National Board and presented the centenary baton to Her Majesty The Queen, who was accompanied on the day by the Princess Royal and the Countess of Wessex. The Queen joined Sandringham WI in 1943.

June: c) Our Annual Flower and Handicraft Show was held at Bishopstone Village Hall. We had an excellent response from members this year with a total of 225 entries, including some from our new members. The judges all commented on the increased entry numbers and on the high quality of the entries. They left some insightful comments aimed at helping us “up our game even more” for next year.

August: We enjoyed a Summer Garden Party at Hazel’s House. Sadly the weather was not kind but we still had a very enjoyable get together.

September: We celebrated our WI’s 61st Birthday and also the WIs Centenary Year with a cream tea at the New Calley Arms. It was a fun afternoon.

October: Some of our members enjoyed a visit to Westonbirt Arboretum; the Autumn colours were spectacular.

November: We arranged a “Crafty Afternoon”, where members got hands-on making Christmas wreaths and other festive items.

December: we enjoyed our 2015 Christmas Celebration Meeting at Bishopstone Village Hall, in the company of friends and guests.  The main course was prepared by the Committee while members provided desserts and raffle prizes. Paul Williams presented a slide show prepared from old photos in our WI scrapbooks and musical entertainment was provided by the singing group “Generations of Sound” from Shrivenham. It was a lovely festive social occasion.

May:  a) Resolutions Meeting to discuss Organ Donation. Dr Malcolm Watters and Allison Salmon from the Great Western Hospital provided great insight into the subject. b) visit to the Wyvern Theatre to see the ballet Cinderella. c) Some of us heard Adam Henson and Peter Reade speak at a WFWI event in Trowbridge.

June: a) Annual Flower and Handicraft Show; we welcomed Ray Tetlow, our Federation Advisor, who joined us for the evening b) Supper at Swindon College Training Restaurant. c) Some of us entered the WFWI Quizzical Pursuits competition at Highworth.

September: a) Photo shoot of our WI members holding the centenary baton at the Trigonometry Point near the Ridgway. b) Some of us attended the WFWI Coming Up Smelling of Roses event at West Lavington. c) Visit to Millets Farm Craft Fair. d) Some of us joined the WFWI coach trip to the Royal Chelsea Hospital.

October: We celebrated our 60th Birthday in style with a buffet supper, bubbly and old fashioned games. Our scrapbooks were also on display. Isobel Acott, the Chair of WFWI and her husband were our guests for the evening.

December: Christmas Celebrations with a buffet supper and desserts; the entertainment was provided by magician Peter Wentworth.

January/February:  Visits to the Wyvern Theatre to see the ballet Coppelia and a comedy version of 39 Steps.

June: There were 197 entries at our Flower and Handicraft Show.

July: Garden Party at  Lynda P’s in Hinton Parva, plus a bring and buy sale to raise funds.

August: a) Meeting with Robert Buckland MP and Jean Johnson (former Chair of Hampshire Federation) to discuss “decriminalisation of prostitution”.  b) Safari Supper enjoyed by 36 members and guests. c) Guided walking tour of Hungerford plus afternoon tea with the Mothers’ Union. d) Visit to the Rutherford Appleton Laboratory, Harwell.

December: a) Christmas Crafting at Hinton Parva. b)  Christmas Celebrations, 60 members and guests, meal provided  by the Royal Oak and entertainment  by the Sarsen Songmen.

March: a) Visit to the Functional Magnetic Resonance Imaging Centre for the Brain, at the John Radcliffe Hospital in Oxford. b) Some members participated in the WFWI Food and Fashion Event at Melksham which starred Mary Berry (cook), with Joan Presley (hats) and fashions by Debenhams and New College students.

May: a) 30 members and guests took a day trip to the Chilterns by coach and then by narrow boat on the Grand Junction Canal b) Supper at Swindon College Training Restaurant.

October: Members Meeting plus talks by 3 members about their lives and experiences.

Autumn Ridgeway Group Meeting: The entertainment was provided by the Melksham Pearlies. The competition – “an item involving pearls” – was won by Doris from our WI.

May: Guided Tour of Hidden London and the Regents Canal.

June: a) Our Annual Fower and Handicraft Show b) Visit to the end of term show “All Stitched Up” presented by fashion and textile students from New College.

July: Some of our members enjoyed an evening with Michael Faraday – the so called “Father of Electricity” – organised by WFWI at Bromham, with David Hall acting the part in period dress.

August:  a) Bring and Buy Coffee Morning in Lynda P’s to raise funds for our WI and for the “Do It For Denman College” initiative. b) Visit to the Harwell Diamond Light Source.

September: a) Horse riding in Hinton Parva. b) Race Night and Ploughman’s Supper to mark our 57th birthday.

October: a) Blue Badge guided tour of the Oxford Colleges b) Members’ Meeting plus a talk by NFWI show judge – Sue Elliot.

December: Christmas Celebration buffet with entertainment by the Wrag Singers from Highworth.

October  a) Visit to the Medical Research Council’s Mammalian Genetics Unit at Harwell where with expert tuition, we extracted DNA from bananas. b) Craft afternoon making fabric covered boxes. c) Trip to Oxford to see a matinee performance of “Hairspray”. d) Visit to the Wyvern Theatre Swindon to see Beauty and the Beast.

December: Christmas celebration meal with entertainment by Geoff Walters and his group “Encore”.

Back to WI (Bishopstone with Hinton Parva)