Ashbury Village Hall enjoys a central location in Chapel Lane, close to the War Memorial. It was built in 1864 to accommodate The National School, a charity school for children of the poor. Following construction of a new Ashbury with Compton Beauchamp C of E (Voluntary Aided) Primary School in 1960, the old National School was used as a Village Hall. This arrangement was formalised on the death of the Countess of Craven, in 1961, when she bequeathed this building in her will for the use of the people of Ashbury. On inspection 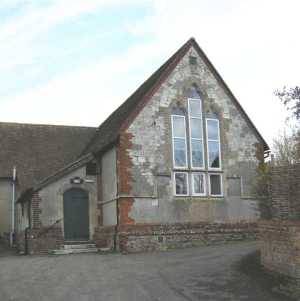 the building was found to have fallen into disrepair. Fund raising was a constant problem but loans secured from Oxfordshire Rural Community Council, Department of Education and Social Service eventually enabled the repairs to proceed. In 1975 a new ceiling was installed at a cost of around £400 and the main hall floor was repaired in 1983 at a cost of £1100. Interestingly, these works uncovered the original school cane. Ashbury Parish Council subsequently paid for modernisation of the ladies cloakroom. In 1984 an oversight was discovered with regard to the late Countess of Craven’s will. To everyone’s astonishment it transpired that the Head Master’s house, next to the Village Hall was part of the bequest to Ashbury Village. Since house prices were high at that time it was agreed that the house should be put onto the market. The funds thus raised were invested in a Trust which generates a modest monthly income to help maintain the fabric of the Hall. In 1989 for example, the vestibule was refurbished at a cost of £2,000. Today, the business and upkeep of the Hall are overseen by a local Committee. The Hall is used on a regular basis by a number of Village groups and it also hosts several community functions each year.