Ashbury marks the 100th Anniversary of the First World War 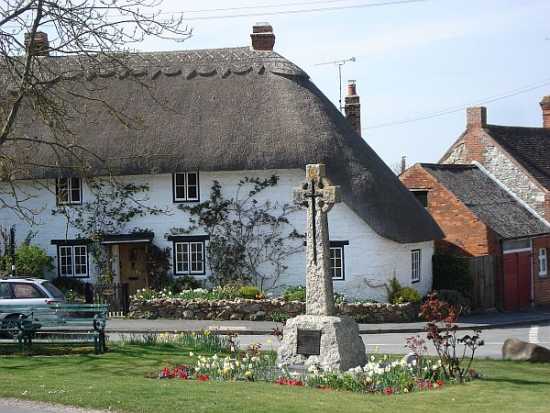 St Mary’s Church Ashbury housed a special exhibition on Saturday 8th and Sunday 9th November 2014 to remember those men from Ashbury who served in the Great War. To read the accompanying pamphlet prepared by the Reverend Norma Ferguson please click here. Some photos taken at the exhibition may be viewed by clicking here.

The End of World War One Remembered via a dedicated Altar Kneeler stitched for St Mary’s Church Ashbury – 2018. 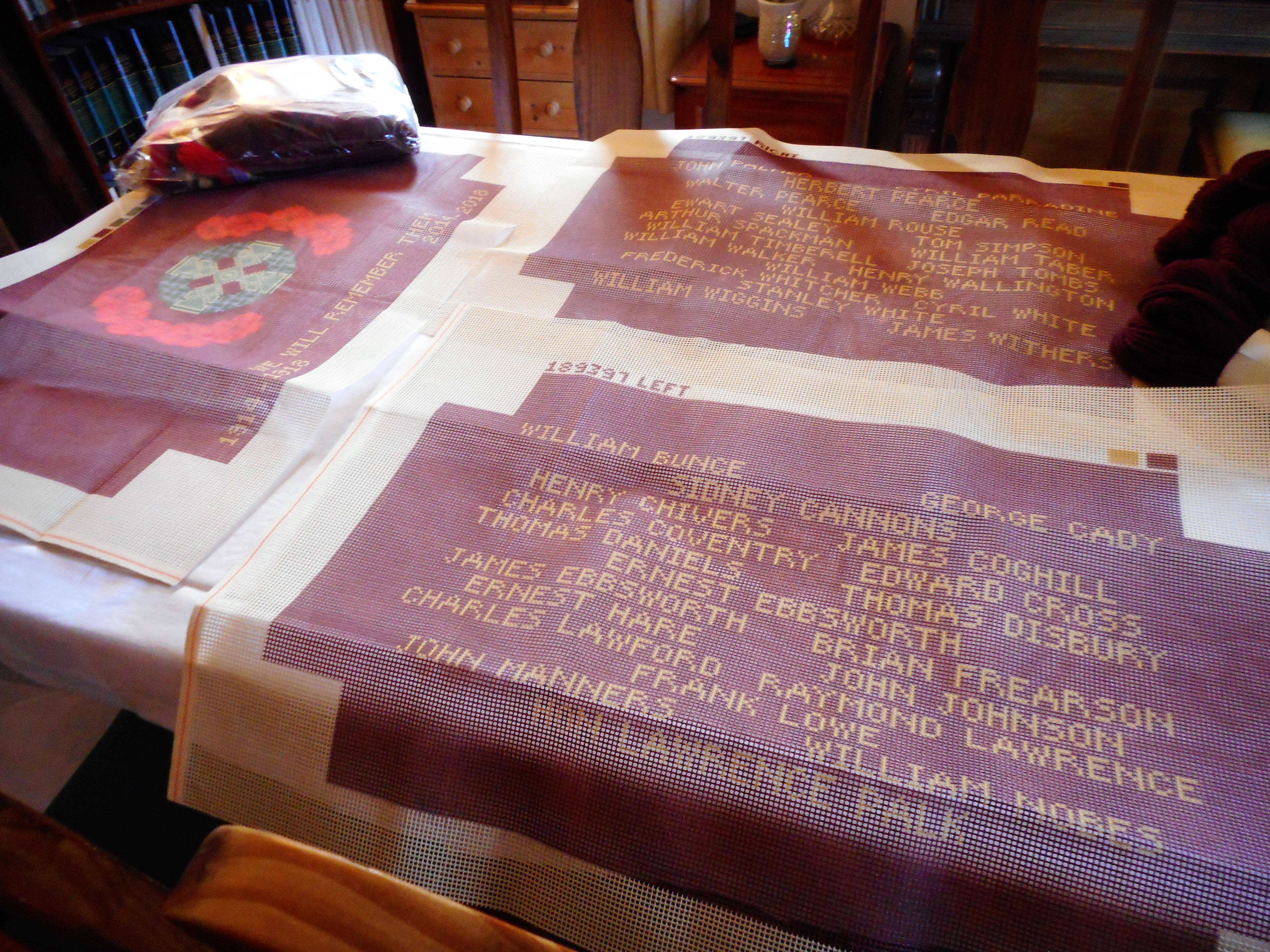 In 2018 the ladies of Ashbury Parish worked together, under the guidance of the Reverend Norma Fergusson, to stitch an altar kneeler, for St Mary’s Church; the kneeler bears the names of all those brave Ashbury men who served, died or survived the Great War.  It was completed to coincide with the 2018 Remembrance Service held at Ashbury to mark the end of the Great War; photographs may be viewed on those pages.

August 2014 marked the one hundredth anniversary of the outbreak of World War One. It was the first instance of total war with whole nations being pitted against each other. More than 65 million men fought on land, sea and in the air from over 30 different countries and the use of modern weaponry caused mass casualties. The total number of military and civilian casualties was over 37 million. Sadly, it is believed that about half of the military casualties have no known grave.

In different ways we can all sense a connection with the First World War, perhaps through our own family history, or the heritage of our local communities, or because of the dramatic long-term impact the war has had on society and the world we live in today.

It seemed appropriate in the centenary year that the men from Ashbury who served in World War 1 should be remembered, not only in traditional services and ceremonies, but also via their personal contributions and sacrifices. The logical starting point for this project was the commemorative list of names inscribed on the Ashbury War Memorial, the Roll of Honour in St Mary’s Church Ashbury (see photos below) and the burial records for Ashbury Churchyard. The names were then interrogated via a variety of on-line web sites (listed later).

There is a further Monument, located just outside Ashbury at the junction of Knighton Hill with the B4507 which bears the names of 13 men from the Parish of Compton Beachamp who served in the Great War and 2 men who died. As well as this a further 11 men are remembered on the Compton Beachamp Church Roll, and the two men commemorated on the Monument who died are also remembered in a wall plaque in St Swithuns Church. All these men have also been researched as part of the Ashbury project (see later). 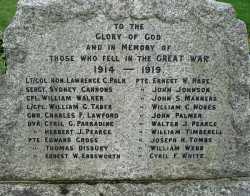 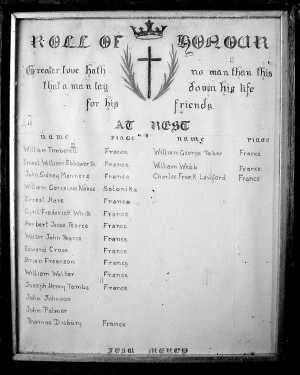 Inconsistency of records. Inevitably, the project turned out to be rather more complicated than originally envisaged. The names of local men who served and died in WW1 are recorded both on the Ashbury War Memorial (20 names) and on the Roll of Honour within St Mary’s Church Ashbury (18 names). Images of both inscriptions may be viewed above. But even that is not a straightforward anomaly, since three men commemorated on the War Memorial (Lawrence Palk, Sydney Cannons and Cyril Parradine) are not included in the Church Roll and the Church Roll includes one name (B. Frearson) that is not recorded on the War Memorial.

County boundaries. It became clear from the preceding observations that County boundaries have had their own impact. For example, Ashbury was in the County of Berkshire until 1974 when boundary changes transferred it to Oxfordshire. This change also applies of the nearby hamlet of Idstone, which lies within the Civil Parish of Ashbury, and to the neighbouring village of Shrivenham. Bishopstone village, which has become relevant to this project, lies just beyond Idstone, but is in Wiltshire. County boundaries of course also impinge upon where men enlisted and which regiments they joined.

Additional names. Searches of on-line military and census records have revealed an additional 19 names, with a connection to Ashbury, that are not listed on either our War Memorial or the Church Roll of Honour. Some of these men served and returned home, and some of those received a WW1 pension, Anecdotes found in historical papers relevant to Ashbury (see below) indicate that four Ashbury friends known as “The Four Toms” (Daniels, Disbury, Simpson and Halliday) enlisted at Reading at the beginning of the War. One of these names – Thomas Disbury – is commemorated on both our War Memorial and Church Roll. Records have now been found for Tom Daniels and Tom Simpson and are included here. Relevant data have yet to be found for Tom Halliday, but the Halliday family is mentioned in the Notes and Anecdotes section below as having lived near the Ashbury Lyde (water cress beds).

In early 2018 information on and photos of another man – Ernest New – who served in and survived the great war were brought forward by his relative Ros New.  Ernest was born in 1884 and resided in Ashbury. He is listed as a cowman on a farm in the 1911 census.  Ernest enlisted on 5/7/1915 and served initially in the Yeomanry (private 2358 rifle brigade).  He later transferred to the Infantry, 4th Royal Berks Regiment (Regimental No: 202890).  The theatre of war was France.  Ernest was discharged “sick” (2/10/1917) and  died in  1965; he is buried in St Mary’s Church yard Ashbury. Ernest was awarded the Victory Medal and the British Medal.

Towards the end of 2018 Richard Green and Tom Spence  drew attention to the fact that Tom’s grand father – Robert (Bob) Spence – had been awarded the DFC (Distinguished Flying Cross) after flying in the Royal Flying Corps in the first world war. The DFC was awarded to men who had shown exemplary gallantry during active operations against the enemy in the air.  Bob moved to Ashbury between the two wars; he was farming during the second war firstly as a tenant of the Cravens and went on to purchase the Manor House plus several other farms when the Craven estate was dispersed in the nineteen fifties.

Enigmas. There is one name (Edward Cross) inscribed on both the Ashbury War Memorial and the Ashbury Church Roll for which no obvious connection to Ashbury has been identified. However, the records of two men bearing that name have been found with connections to Witshire and Berkshire which may be relevant and have been tabulated separately. There is a reference in the Notes and Anecdotes section below that Edward Cross lived in Odstone.

Missing and Burnt Records, Click here to read why there is only a 40% chance of finding the records of men who served in the Great War and were discharged between 1914 and 1920.

In light of the above anomalies a set of criteria was developed to enable this project to go forward. Essentially, men who enlisted for the Great War have been included here if they met one or more of the following criteria:

Results of the Ashbury WW1 Project

Click here to see updated information on all the men from Ashbury men who served in the Great War, including those who lost their lives and those who survived and returned home.

Whilst every effort has been made to correlate data between the various on-line databases consulted, this has not been at all straightforward. For example: surnames may be spelt differently, middle names may be used instead of first names and in some cases key information such as place of birth, place of residence, or the award of military medals has either not been included in the on-line data, or the records are so damaged as to be unreadable. We apologise unreservedly if this has led to errors.

If any reader identifies anything in the records that requires amendment could they please email the details to djmhighbury11@aol.com (please type “ashbury war” in the email title bar) We are anxious that the data are correct.

Notes and Anecdotes concerning men studied in the Ashbury Project

Can you contribute to the Ashbury WW1 Project?

If anyone reading this page would like to add any additional information on, anecdotes about, or photographs of the Ashbury men remembered here, we would be delighted to hear from you – please email djmhighbury11@aol.com (please type “ashbury war” in the email title bar) with details.

Similarly, if you know of Ashbury men who fell in the Great War that we have not identified here, or indeed of soldiers who survived the Great War, do please let us know using the email address djmhighbury11@aol.com (please type “ashbury war” in the email title bar).

About the Ashbury War Memorial: The Ashbury War Memorial stands on a green in the centre of the village. It is a celtic cross made of rough hewn stone standing on a plinth with a step. There are bronze crossed swords on the front and back faces of the cross representing “sacrifice”. The names inscribed on one side of the Memorial are of 20 men who died during WW1. On the other side are the names of 6 men who died during WW2 and 1 man who died in the Falklands War. The Memorial was unveiled on 10th May 1921 by the Countess of Craven, whose only son William George Bradley Craven fought with the Hampshire Regiment in France and in Palestine during the war; he returned home having sustained terrible injuries and the effects of gas attacks. In 2008 the War Memorials Trust gave £205 towards repainting the names on the Memorial with black enamel paint,

On-line databases interrogated during this Project

Back to Living History Project